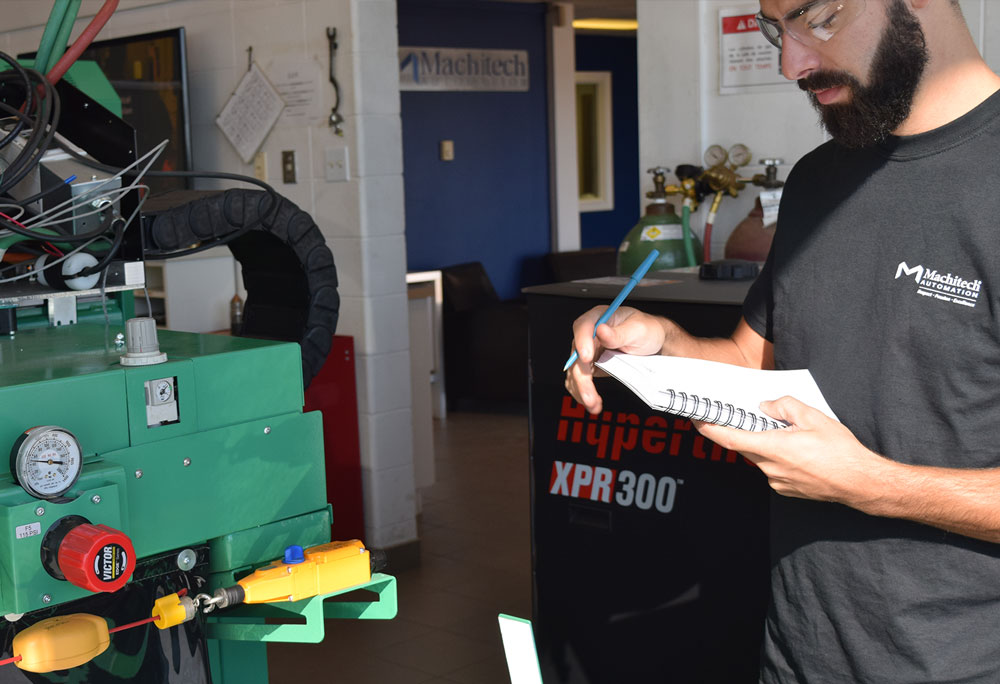 CNC plasma cutters have become workshop and manufacturing staples because of the ease and precision with which they cut. They are an investment but they are an investment that offers a great return because they efficiently expedite the cutting process which leads to higher profitability. While much of a CNC plasma cutting system is a one-time investment, there are plasma cutter consumables that do have to be replaced with use. When we talk about plasma cutter consumables, we are generally talking about the nozzle and electrode (though there are other consumables that will need to be replaced with less frequency).

Most people begin to notice that they need to replace their consumables when cut quality begins to decrease. TheFabricator elaborates on signs that consumables need to be replaced and when to do so, “Remember when I mentioned that the nozzle constricts the arc at the orifice? As that nozzle is used, the orifice gets larger and out-of-round. Even though it is cooled by the gas swirling down through it, it’s still very hot. Eventually the orifice widens and you lose that constricted arc. The kerf, which is the width of metal that you remove during the cut, gets wider and wider. In addition, your cut speed gets slower because you don’t have that concentrated arc. As a result, you don’t have as much heat concentrated it one place; it sort of fans out. A lot of this is caused by a worn nozzle. If you look at the end of the nozzle and see that the orifice is exceptionally big or oval-shaped, then you know it’s time to change the nozzle. As you use the electrode, the hafnium/tungsten becomes molten and pieces of it start to blow out through the nozzle as you cut. It develops a pit at the front of the electrode. Once that pit depth is over 1⁄32, it’s time to change the consumable… We always recommend that you change the electrode and nozzle together. That way when you throw in a new set of consumables, you have the perfect orifice and the perfect pit depth every time.” How long a consumable will last varies heavily depending on a variety of factors including experience, frequency of use, material thickness, and more. Consult your manufacturer to learn about proper usage and ways to extend consumable life.

Plasma cutters can slice through thick hunks of metal like a hot knife going through butter, no joke. The plasma (super-heated, electrically charged air) which gives these tools their name is at a temperature of about 10,000° Fahrenheit, and moves at thousands of feet per second. The flow of air and electricity through the nozzle causes erosion the same way water does when running down stream. Sure the erosion is on the atomic level, but electricity flows at a much higher speed than running water, so with use it eventually wears out the precisely sized hole in the end of the nozzle.

The electrode does not have plasma running through it. The air, not yet charged or heated, swirls around it as it goes through the torch. The electrode needs this airflow for cooling so it doesn’t start to melt with all the heat coming off the end of it, where the plasma is formed. Just like the electrodes in a spark plug, there is a highly conductive core, surrounded by a lesser metal like copper. High voltage by itself will cause the erosion of the center of the electrode. Let it go too long and your torch will lose a great deal of its cutting ability, as the copper produces a lower voltage arc, and less hot plasma.

What Does a CNC Plasma Cutting Table Do?

Plasma cutting is the process of fabricating steel, aluminum, iron, and other metals using intense heat generated by a plasma-fueled torch. It is a powerful means of cutting metal, and when you add CNC controls to the mix, it is also one of the most efficient. CNC stands for computer-numerical control and refers to automated […]

How to Choose a CNC Plasma Cutter

Your custom fabrication shop has had some success, and now you’re looking for ways to take it to the next level. If you’re still fabricating by hand, you may be considering an investment in a CNC plasma cutting table. Doing so can certainly benefit your shop—it’s no secret that automated technology can improve cut quality […]