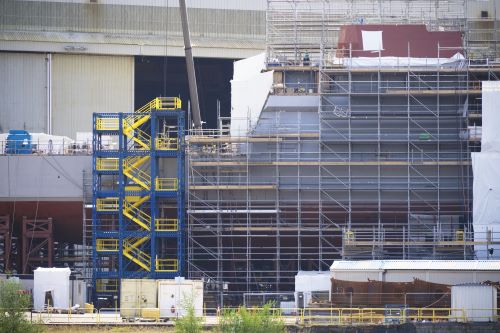 Shipbuilding is a complex process involving numerous raw materials and a fleet of talented fabricators. It is also a huge and ever-growing industry that can certainly be a cash cow for metal fabricators who specialize in crafting ship parts. Let’s look at three metals that are commonly used in shipbuilding:

Though the art of shipbuilding goes back centuries, it wasn’t until the 1940s that steel became the go-to material for ship construction. Its introduction to the industry was a result of the need for strong, yet fast, ships during World War II. Over the years since then, steel materials used for building ships were refined to emphasize durability on the open sea and resistance to rust.

Because steel blends impressive strength with malleability, almost every ship that is built today has a hull made of steel. High-tensile steel hulls allow ships to carry enormous weight without capsizing. In addition to the hull, steel is typically used in other structural components of a ship, including bulkheads, gunwales, and masts.

With a structure made of steel, ships are strong enough to resist damage from constant exposure and contact with the ocean. However, steel is heavy, and too much of it can impact how well a ship stays afloat. For areas of a ship that aren’t in contact with the ocean, aluminum is primarily used. Though not as durable as steel, aluminum is still impressively strong and weighs up to 60 times less. Plus, it is naturally resistant to rust. That’s why, for non-structural ship components, aluminum is popularly used. For instance, equipment, fuel tanks, storage fixtures, and shipping containers are typically made from aluminum.

Brass is not commonly used in the structure of a ship. Where it is most often utilized is in the engines and propellers. Propellers are susceptible to damage from cavitation. Cavitation refers to small bubbles of gas that are generated as the propeller blades spin and create low-pressure points in the water. Though they may seem insignificant, those tiny bubbles all emit miniscule shock waves when they collapse, which can collectively produce enough force to damage the propeller. Brass is naturally resistant to cavitation and can help maximize the lifespan of ship-engine propellers.

Seafaring vessels have played such an important role in society going back hundreds of years, and they are as important as ever in the modern capitalist world. The shipbuilding industry is booming and always in need of talented metal fabricators to produce quality plates and other parts for building ships.

Though the shipbuilding industry is hot, it is also crowded. To grow your custom fabrication shop and get ahead of your competitors, you need the right fabrication equipment for the job. At Machitech, we manufacture state-of-the-art CNC plasma, waterjet, and oxy-fuel cutting tables for metal fabrication. Our solutions are fully customizable and include free and unlimited support for life. Contact us today to learn more.

From food and beverage equipment to roofing and gutters, shipping containers, and HVAC systems, there are nearly endless applications of aluminum sheet metal across several industries. It is so widely used because of its many advantages. For instance, it is easy to fabricate and resists corrosion better than other metals. Professional fabricators use specialized equipment, […]

Carbon Steel vs. Stainless Steel: Which Is More Durable?